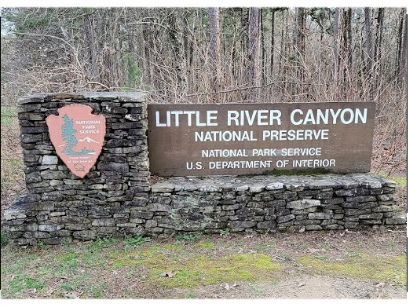 Fort Payne, Ala.—On the night of Easter Sunday, April 12, 2020, severe storms and torrential rains ravaged northeastern Alabama, including Little River Canyon National Preserve. The storms resulted in a flash flood at Canyon Mouth Day Use Area in Cherokee County.  The area is near the downstream end of the Preserve where the Little River exits the canyon and makes its way to Weiss Lake a few miles downstream. The extreme high flows in the river that night were the fourth highest on record, dating back to 1929.  According to the USGS stream gauge at Canyon Mouth, the volume of water in the river exceeded 36,000 cubic feet per second.  “Average flows there are on the order of two to three hundred cubic feet per second. This was an extreme storm event,” says park superintendent Steve Black. The flood did significant damage to park facilities and caused the river to move its channel to an older channel farther south.  At low flows, the previous channel is now mostly bypassed for approximately a mile, the river choosing to flow in the southern channel until the two merge farther downstream. “At higher flows, above approximately 600 cubic feet per second, the previous channel still flows,” says Black.

Although clean up and repairs at the Canyon Mouth Day Use Area have already been completed, the park has no plans of trying to move the channel back to its previous alignment. “From the National Park Service’s perspective, this was a natural event. Our policy and indeed the park’s enabling legislation make it illegal for us to alter what Mother Nature has done on her own accord,” said Superintendent Black. “We have no idea whether the channel will eventually shift back to its previous alignment,” he added. “Rivers are naturally dynamic particularly in delta areas, and Canyon Mouth is essentially a delta.”

Park staff have reached out to experts within the agency, both with the regional office in Atlanta and with the agency’s Water Resources Division in Ft Collins, Colorado.  “All agree that this was a natural event,” said Black. “Our mandate is crystal clear. That river must be left to choose its own path.”

Little River Canyon National Preserve was established in 1992 as a unit of the National Park System. Today it encompasses over 11,000 acres.  The river itself originates atop Lookout Mountain and flows over 30 miles before emptying into Weiss Lake.

Saturation in South End of County Leads to 17 Arrested