Around 11:08 AM 11 March 2019 Rainsville Police Department received a call from the First Southern State Bank, in Rainsville. They had a customer in the bank that was presenting a forged and stolen check in the amount of $3,900.00. Sgt. Nick Knopps was the first officer on scene and detained Marty C. Mathews of Chattanooga. Chief Smith, Detective Todd Bowen arrived on scene and the investigation continued.

The investigation revealed that Mr. Mathews had been cashing these stolen checks in Fort Payne, Cherokee County AL, and Kimball TN. Approximately $27,000.00 has been written at this time. Mr. Mathews has two accomplices that fled the scene and traveled East bound on Alabama Highway 35 in a blue Ford Focus with an unknown Texas tag. Mr. Mathews was arrested and transported to the Rainsville City Detention Center for processing and booking.

Detective Todd Bowen obtained warrants for four counts of Forgery in the 3rd degree for Mr. Mathews and he was then transported to the DeKalb County Detention center. Mathews bond has been set at $30,000.00, We need the public’s help in identifying these unknown men. If anyone can identify who these men are please contact the Rainsville Police Department at 256-638-2157 or email rainsvillepd@farmerstel.com. Attached are the photos from surveillance camera’s. Thank you and God Bless. 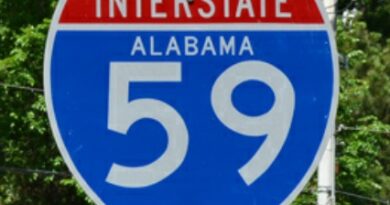 I-59 traffic to be diverted for road repair

Rainsville Police Department Makes 26 Arrests In First Week of May