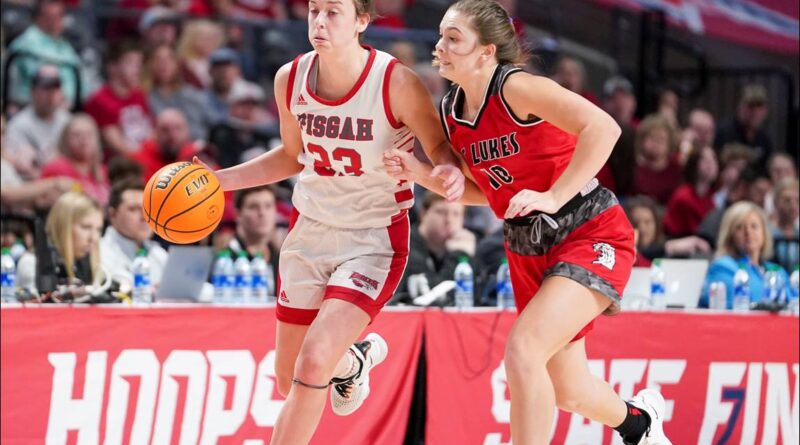 Class 2A Girls’ State Championship
Pisgah 74, St. Luke’s Episcopal 54
By Josh  Bean | For the AHSAA
BIRMINGHAM – Pisgah High School completed the Drive for Five.
The Eagles, coached by Carey Ellison, won their fifth straight state championship with a 74-54 victory over St. Luke’s in Friday’s Class 2A girls’ championship game at the BJCC Legacy Arena. Pisgah won 3A titles in 2018, 2019 and 2020 before moving to 2A and capturing titles in 2021 and now 2022.
The state championship was the school’s 10th overall and the eighth won under Ellison’s tutelage, which ties him for most girls’ state championships coached with Hazel Green’s Tim Miller and Lauderdale County’s Brant Llewellyn. Miller will be vying for his ninth Saturday when Hazel Green takes on Oxford in the Class 6A state finals and his team will also be chasing its fifth state crown in a row.
The Eagles’ 10 state titles are second only to Lauderdale County, which has won 13. Its last championship came in Class 3A in 2016. Lauderdale County was also the first girls’ program to win five championships in a row – winning them all in Class 3A from 2012-2016.
“To win that many in a row is just insane,” said senior Molly Heard, who won the tournament MVP award for the third consecutive year – another rare feat.
Heard filled the stat sheet for the Eagles (33-3) with 25 points, 16 rebounds, four blocked shots, three steals and three assists. She also passed 2019 Miss Basketball Annie Hughes to become Pisgah’s all-time leading scorer with her 24th point in Friday’s game.
Heard finished her career with 2,696 points. Hughes, now at Auburn University, had 2,694 in her prep career at Pisgah. Heard is heading to Lipscomb University.
Molly Holcomb added 23 points, including four 3-pointers, and Lila Kate Wheeler added 13 points.
Chloe Gilmore led St. Luke’s (21-9) with 19 points, sinking three of the Wildcats’ four treys. Iamunique Bowie added 17 points and 15 rebounds, and Arbany Holder scored 14 points.
St. Luke’s, coached by Garreth Trawick, has advanced to the state semifinals in Birmingham for four straight seasons, but fell one game shy of winning its first title. The Wildcats also finished runner-up to Spring Garden in the 2020 1A championship game.
Pisgah has played in the state semifinals for six straight seasons, finishing as 3A runner-up to Locus Fork in 2017 before starting its five-year championship reign.
“I’m so proud of my seniors,” Ellison said. “My seniors stepped up to the challenge. They led us all year.”
The Class 2A boys championship game featuring Section and Mars Hill Bible, followed Friday, with title games in 3A and 4A set for later Friday. Classes 5A, 6A and 7A will play title games Saturday.
All championship games are being live-streamed over the NFHS Network and are being telecast over the AHSAA TV Network. WOTM TV is producing all the contests. The AHSAA Radio Network is also broadcasting all games live over its radio/internet network as well.
CLASS 2A GIRLS’ STATE ALL-TOURNEY TEAM
Molly Heard, Pisgah (MVP); Lila Kate Wheeler, Pisgah; Molly Holcomb, Pisgah; Iamunique Bowie, St. Luke’s Episcopal; Chloe Gilmore, St. Luke’s Episcopal.

Person with measles made stop in Fort Payne, Alabama