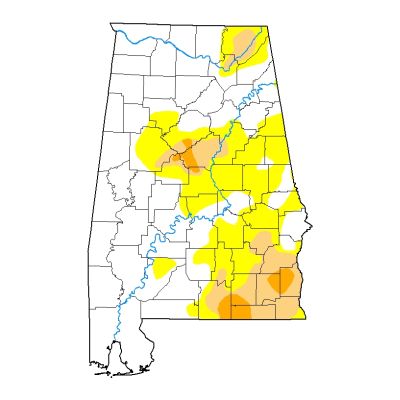 Even though many areas across the Southeast have seen showers and thunderstorms recently, some with heavy rainfall, there are still locations that are actually in drought conditions and have a rainfall deficit. According to the United State Drought Monitor (https://droughtmonitor.unl.edu/), rainfall deficits of 6 to 9 inches since mid-May were observed in parts of southeastern Alabama. Parts of Northeastern Alabama are also in dry conditions. Parts of Dekalb, Jackson, and Marshall counties are in “abnormally dry” to “moderate drought” conditions (see map for more details on these specific areas). Some parts of Central and Southeastern Alabama are in severe drought conditions.

Here is the latest report from the United States Drought Monitor website:

Showers and thunderstorms were hit-and-miss across the region, but only a few tenths of an inch of rain fell on most of the Carolinas (away from the immediate coast), central and northern Georgia, and the eastern half of Alabama. Rainfall was a little more abundant in western Alabama, Florida, and especially southeastern Georgia. At least a few tenths of an inch fell, and amounts of 1.5 to locally 3.5 inches covered nearly half of these areas. The heavier totals (over 1.5 inches) were more widespread in southeastern Georgia, with 4 to nearly 6 inches soaking a few patches near the Florida border. Dryness and drought improvement were noted in a few small areas where rainfall was heavier, but deterioration was much more common, especially from eastern Alabama through southeastern North Carolina. Most notably, abnormal dryness expanded broadly to cover most of central Georgia and South Carolina. Rainfall deficits of 6 to 9 inches since mid-May were observed in parts of southeastern Alabama and southeastern North Carolina while amounts 3 to 6 inches below normal covered central and southwestern Georgia and a few areas of non-coastal South Carolina.”