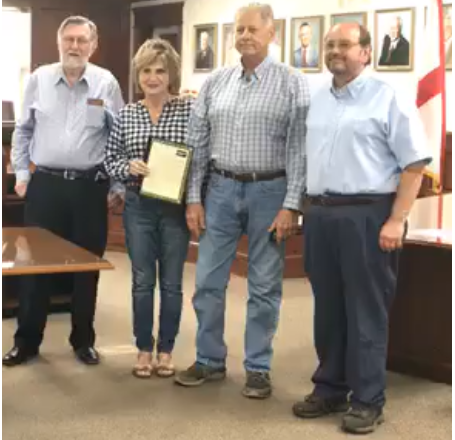 The Fort Payne City Council held their regular meeting on Tuesday, May 21, 2019. In the meeting, Mayor Larry Chesser explained that years ago there was a national day set aside that was called “Mayor’s day of Recognition”. This day is to recognize either individuals or groups that are of a great service to their community. Mayor Chesser stated, “I would like to recognize a group that has contributed greatly to our reputation, to our economy, to just the general enjoyment of our citizens, as well as our local people. The Third Saturday Sunset Committee.” Mayor Chesser presented the proclamation to three founding members of that committee, Amelia Landstreet, Terry Locklear, and Steve Westmoreland.

The council approved the following during the meeting:

Had an audience member address the council about an issue of a chert pit being operated near her property and heavy truck traffic on a small, almost single lane road, which runs by her house. She was asking for the council to check into doing something about the situation. Some councilmembers were aware of the situation and will be checking to see what can be done legally, long term.

Crossville man arrested for sexual abuse of a child