Robert Avery, with the U.S. Census Bureau, spoke before the commission today. Telling the commission that the Bureau would be hiring full and part time employees to conduct the 2020 census. He stated that around six hundred will be employed in Dekalb County, at the peak of the census taking, with hourly pay ranging from $13.50 to $17.00 per hour and .58/mile. Anyone interested in any of these jobs can visit 2020census.gov/jobs for more information.

Tom Broyles, Superintendent of the Dekalb County Road Department, gave updates at today’s meeting. He stated that patch trucks were back on the roads and working as hard as they could. The department is hauling chert to unpaved roads and grading unpaved roads. Work started today on Tutwiler Gap, with no estimate of how long repairs will take. Once Tutwiler Gap is repaired, then work will begin on Wade’s Gap next.

The commission approved a request from Matt Sharp to turn a damage claim of $180.00 over to the insurance company. The claim says damage was caused to a vehicle on Hwy 35 when a rock came off of a county dump truck and struck the vehicle.

Approved to accept the resignations of two dispatchers, who are moving out of state, Blakely Moore and Christa Furgerson.

The commission approved to appoint Mr. Westbrook to the 911 Board. 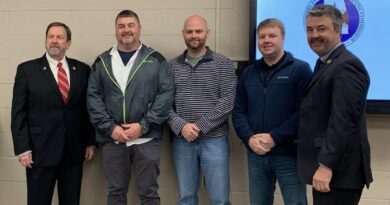