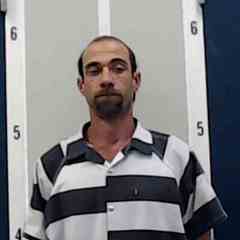 FORT PAYNE, Ala. — A man from Bryant is in custody regarding an incident that occurred at the gas station in Hammondville last week.

The incident occurred at approximately 9:45 am last Wednesday (November 6, 2019) at the gas station on Alabama Highway 117 at I-59 in Hammondville. A young woman that was pumping gas was harassed by an unidentified white male driving a white Mercedes.

The offender walked around her car and acted as if he was going to the driver’s side of her car. After the woman got in the vehicle and locked her doors, the offender parked across the road and filmed the woman. After an acquaintance arrived to help the woman, the subject had driven to the interstate and seemed to be waiting on the victim.

Investigators with the DeKalb County Sheriff’s Office obtained security camera footage of the suspect and vehicle. After posting the images on social media, the public helped identify the suspect as Eugene Evans (44 of Bryant, Alabama).

Evans was taken into custody Tuesday night by the Jackson County Sheriff’s Office and remains in the DeKalb County Detention Center on a charge of Harassment.

DeKalb County Sheriff Nick Welden said of the case: “This is a job well done by our investigative team with some really good information provided by the public. While this suspect didn’t attack the victim, his intentions may have been much worse.”

“I also can’t stress enough for women to be aware of their surroundings. If something doesn’t feel right about a situation, stay in a well-lit area and call law enforcement for assistance. I’d also like to thank the Jackson and Dade County Sheriff’s Offices for their assistance in this case,” said Sheriff Welden.

September 18, 2019 Mark Huber Comments Off on Shooting at Jackson County Courthouse This Morning