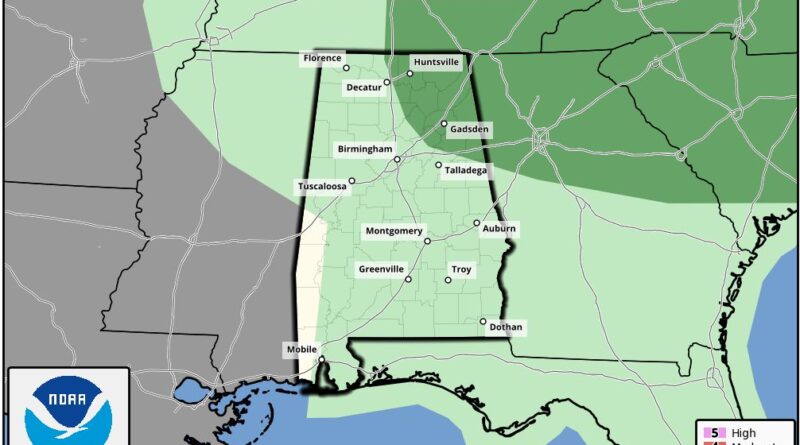 As everyone by now is tired of Severe Weather, there is yet another chance this Saturday, April 25, 2020.

The Storm Prediction Center has a “Marginal Risk” for Severe Weather covering parts of Northern Alabama, Georgia, Eastern Tennessee, and into the Carolina’s.

There will be enough shear to help produce updrafts on Saturday, leading to some Severe Storms. Those storms will be capable of producing damaging winds, hail, and a few Tornadoes are possible. Again, this is a “Marginal Risk” (1 out of 5), so as of today, this is not a very big threat, but remain weather alert on Saturday.

From The Storm Prediction Center:

A broken line of storms will probably form over parts of middle TN into northern AL, and subsequently move east-northeastward across eastern KY/TN into northern GA and the western Carolinas through Saturday evening. Strong effective shear of 50-60+ kt attendant to

the mid-level shortwave trough will be more than sufficient to organize updrafts with any storms that can form across this region. Both large hail and damaging winds appear possible, and a Tornado or two may also occur along and south of the warm front.

Most Court Cases Have Been Cancelled in DeKalb & Cherokee Counties, March 16th – 20th, Due to COVID-19