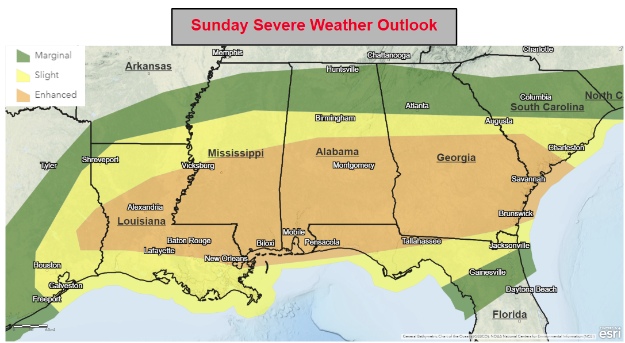 Severe Weather is forecast for the South, again this Sunday. Current models show the outlook area for the highest threat of Severe Weather will cover Central and Southern Alabama. The threat extends from Eastern Texas through Louisiana, Mississippi, Alabama, Georgia, The Florida Panhandle, and South Carolina.

The Storm Prediction Center says all forms of Severe Weather will be possible…Hail, Damaging Winds, and Tornadoes.

Severe storms are likely Sunday across the Gulf Coast states. The greatest threat appears to be from Louisiana to Georgia, with significant Severe Storms expected including Tornadoes and damaging winds. Large hail is likely as well.

From East Texas to Georgia and South Carolina:

Early in the day on Sunday, storms will likely to be ongoing over northern MS and AL related to warm advection. These storms may pose a hail threat initially. With time, these storms may transition to surface based, with an evolving threat of damaging winds or tornadoes from AL into GA.

This could pose a statewide Severe Weather threat, with Hail a primary threat in Northern Alabama. Stay up to date, as things can and do change as we get closer to Sunday.

As always, have multiple ways to receive warnings. If your area goes under a TORNADO WATCH, move then to a shelter and if it is a community shelter, take some kind of a face covering for each person in your party.

DO NOT WAIT UNTIL A WARNING IS ISSUED FOR YOUR AREA BEFORE YOU TRY AND MOVE TO A SHELTER…BY THEN, IT IS TO LATE AND YOU WILL PROBABLY BE DRIVING INTO THE SEVERE WEATHER. Move early to a shelter. 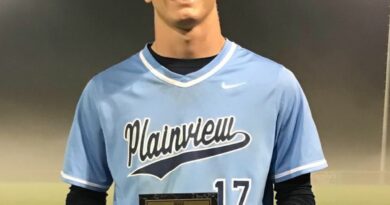 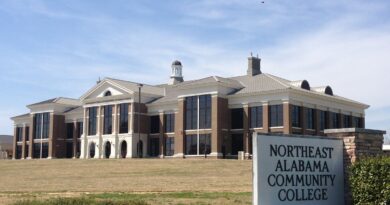 NACC Students to Receive Assistance from CARES Act May 16, 2020