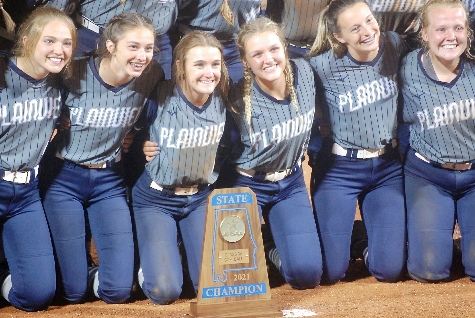 OXFORD – Plainview High School’s fast-pitch softball  team arrived at Choccolocco Park on Saturday needing three straight wins to capture the Class 3A championship.
Little did the Bears know, they’d have to work the midnight shift to do it.
Plainview defeated Houston Academy in the elimination bracket finals and then beat Prattville Christian twice for the championship, first winning 13-4 and then culminating with a 13-0 victory in the winner-take-all finale that started at 10:26 p.m. and ended at 12:06 a.m., by the 10-run-mercy rule in five innings.
The Bears (43-8-1) won their first state fast-pitch softball title and closed out the 2020-21 AHSAA sports championship year in the process.
Jada Hampton hit a three-run homer in the first inning of the final game, and her third-inning, bases-loaded single cleared the bases with the help of a fielding error. Halle Brown had a three-RBI triple in the Bears’ seven-run fourth inning, and Elaine Puckett finished 3-for-4 with three RBIs and three runs scored.
Plainview pitcher and Tournament MVP Tessa Word did the rest, allowing just four hits to earn the complete-game shutout. She walked none and struck out four and also picked up the complete-game win the 13-4 victory. She also had two hits and an RBI.
Prattville Christian (35-10) defeated Plainview 3-2 in Friday night’s winners’ bracket final, but the Panthers never found any rhythm on Saturday.
The 3A championship started more than two hours later than its 5 p.m., scheduled start because the 6A championships also went to the “if” game and ran much longer than expected. The extra rest seemed to energize Plainview.
The Bears won the first game 13-4, thanks to a nine-run seventh inning, and carried the momentum into the 13-0 finale.
All championship games, including the “if necessary” games, were live-streamed over the NFHS Network and televised live over the AHSAA TV Network. Games are also available on demand at the NFHS Network and will be shown on delay WOTM TV and its network of cable stations belonging to the AHSAA TV Network.
Class 3A All-State Tournament Team: Jersee Carter, Prattville Christian; Landyn McAnnally, Prattville Christian; Elaine Puckett, Plainview; Mia Tidmore, Plainview; Halle Brown, Plainview; and Tessa Word, Plainview (MVP). 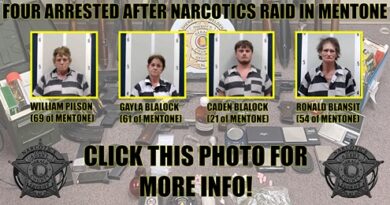 Four arrested and large amount of Narcotics seized in Mentone

The City of Scottsboro, Al. Issues City State of Emergency