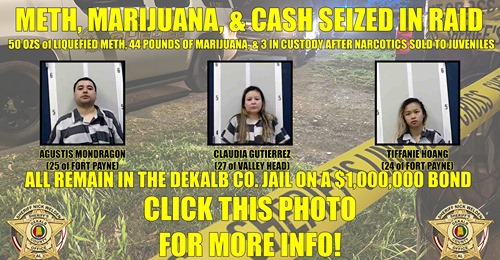 FORT PAYNE, Ala. — On Monday night, DeKalb County Deputies and Narcotics agents conducted a search on County Road 1000 (near Hammondville) resulting in a large amount of narcotics being seized.

The investigation stemmed from information received that several juveniles were purchasing marijuana from other residents in the area. After tracing it to the source, the investigation led narcotics agents to a residence on County Road 1000.

During the search, agents located 44 pounds of marijuana, as well as 50 ounces of liquefied methamphetamine. A conversion lab was also present at the residence.

The methamphetamine found at the residence could produce a large amount of crystal meth.

The investigation then led agents to a residence on 11th Street in Fort Payne, where a large amount of U.S. currency was found. A small amount of liquid methamphetamine and additional marijuana were found at the Fort Payne residence.

An AR15 was also seized at the residence on County Road 1000 and a handgun at the house on 11th Street.

Three were arrested during the investigation:

Agustis Angel Mondragon (25 of Fort Payne) was charged with Manufacturing of a Controlled Substance 1st Degree, Trafficking in any illegal drug (x3), Chemical Endangerment of a Child, and Possession of Drug Paraphernalia.

Tiffanie Denphung Hoang (24 of Fort Payne) was charged with Manufacturing of a Controlled Substance 2nd Degree, Trafficking in any illegal drug (x3), Chemical Endangerment of a Child, and Possession of Drug Paraphernalia.

Claudia Zamudio Gutierrez (27 of Valley Head) was charged with Manufacturing of a Controlled Substance 1st Degree, Trafficking in any illegal drug (x3), Chemical Endangerment of a Child, and Possession of Drug Paraphernalia.

All remain in the DeKalb County Detention Center on a $1,000,000 bond. The investigation continues and more arrests may be forthcoming.

DeKalb County Sheriff Nick Welden said of the arrests: “This is a fantastic job by our deputies and narcotics agents. They dismantled a large narcotics operation with a direct link to the source.”

“These suspects were not only just distributing narcotics in our area, but were directly getting drugs into the hands of our youth. No kind of drug trafficking will be tolerated in our county, and we will tolerate it even less when it destroys the lives of our future generations,” he said. 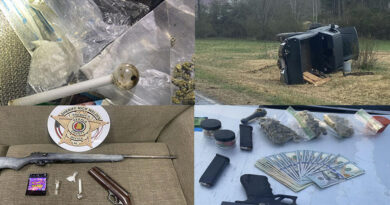