Recently several individuals have reported that they have received phone calls from someone claiming to be either an investigator or an employee of Circuit Judge Jeremy Taylor. The caller claims that there is a warrant for that person’s arrest for failing to appear either as a witness or as a party in a court case. The caller tells the person not to hang up or they would be arrested. They then ask for money.

Judge Taylor responded: “This would never happen. If someone fails to appear for court, there is a procedure to handle that, but that procedure does not include calling a person on the phone and requesting money. Neither my office, nor an investigator, would ever call someone demanding money.”

The caller sometimes tells the person that they can bring cash to the Sheriff’s Office to pay a fine for failing to appear. “It does not work this way. If a person owes fines to the court system, those fines are paid at the Circuit Clerk’s Office. This just goes to show that, again, the process simply does not work the way the caller says.”

The caller may seem to be well informed. “I have been told that they are using the names of employees of my office and the names of investigators. These people are public employees and it would not be hard to find out their names, but it would appear to lend credibility to the caller. Sometimes the phone number they call from looks like it is coming from a law enforcement related number. But this is a scam.”

If anyone receives a call like this, they should report it to law enforcement. Judge Taylor says “Anyone with a question about this type of phone call can call my office. If you receive this call, you can hang up and call my office and we will confirm that we did not direct anyone to call you and demand payment.” 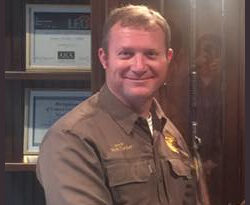